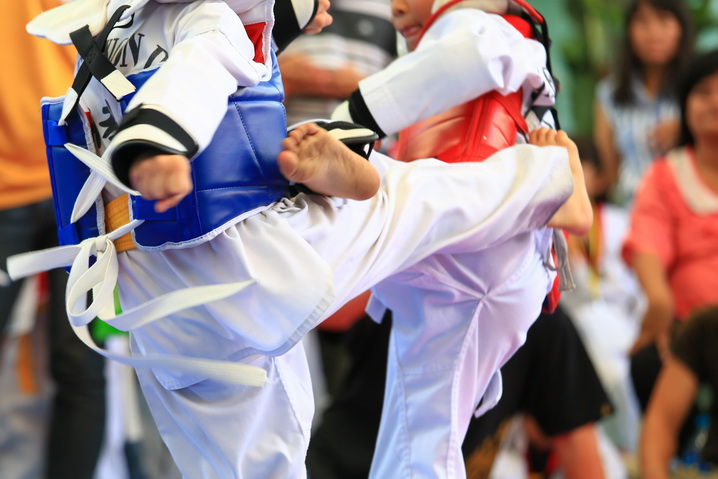 The Techniques, Forms and Lifestyle of Taekwondo

Taekwondo tradition requires that students wear belts that represent the levels of skill they possess. Belts of a solid color indicate a student has mastered this level, while belts that are striped indicate mastery in progress. All students begin with the simple white belt that represents innocence. As their training progresses they earn different colored belts.

Taekwondo practitioners wearing belts from white to red are referred to as “kup” of students. A white belt says the student is in the 10th kup, a student with a red belt is in the 1st kup and is one level away from gaining the Black belt.

Black belts are called “Dan” grades for students older than 16 and “Poome” grades for those 16 and under. Black belts progress from 1st Dan to 9th Dan, or 9th level Dan.

Many martial arts emphasize the importance of hands for delivering strikes. In taekwondo however, the principles are based on the superior reach and strength of the legs. With the proper training and technique legs can also be just as fast, if not even faster, than the average hand for delivering strikes to an opponent.

The spins are what add power to taekwondo techniques. The 360⁰ back kick, the autobahn and the tornado kick all require the body’s full rotation into the kick, this generates significant force and doubles the power of the leg with the weight of the body and force of the leg enhanced by centrifugal force.

Forms are specific patterns of movement applied for either defending against or attacking an opponent, imaginary or real. These are an important feature of taekwondo practice; by closely adhering to proper form students improve their breathing skills, balance, timing and coordination.

Taekwondo is composed of 24 different forms, and as they progress they become significantly more complex. As a committed practitioner of taekwondo, I have found practicing form to be my favorite part of taekwondo. More than merely a combat form, taekwondo forms cultivate balance and coordination throughout a lifetime and also keep the mind and alert and focused.

Another of my favorite taekwondo practices is the practice of board breaking. To break boards first it is necessary to master the special techniques of striking or kicking a board. This practice improves the focus and precision power of the student and can also engender deeper concentration and speed. It is important to learn this properly before attempting to smash through any boards, if the form is not executed properly serious injury could occur.

Pine boards are most often used in teaching this technique because they are easier to manage than smashing tiles or bricks. Depending on the skill level of the student the boards are broken with the feet, hands, head, knees or elbows.

A taekwondo student breaking through a wooden board is an example of Newton’s뭩 third law of motion- that’s the one that speaks of actions and their reactions. Therefore if the board is struck and broken the energy is dispersed into the splinters that break away in all directions. The energy from the strike is absorbed into the board and the board is broken.

If however the board does not break, that energy is returned to the part of the body that struck the board incorrectly. Because the force applied did not get absorbed into the board it is reflected back and this can hurt? Really bad!