Hong Ik Martial Arts > Blog  > Is There a Difference Between a Taekwondo Belt and Other Belts? 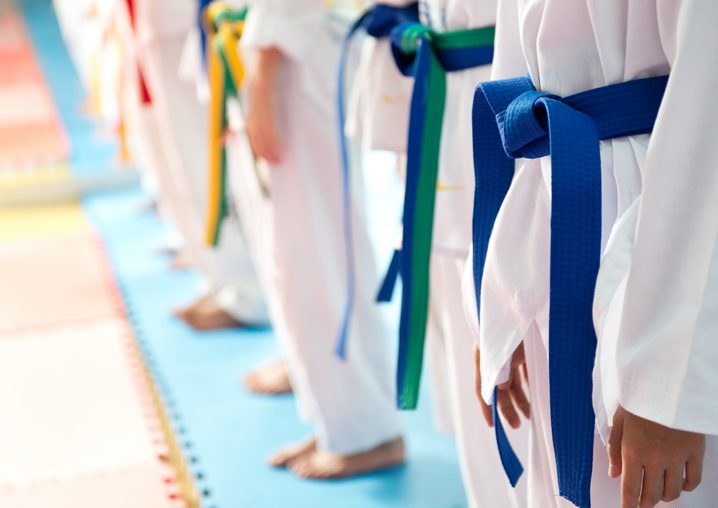 Is There a Difference Between a Taekwondo Belt and Other Belts?

In martial arts, belts are used as a part of the uniform and a symbol of rank. The belt holds the gi, or dobok in Taekwondo, closed and the color of the belt indicates how experienced the practitioner is.

In Taekwondo belts are usually solid in color all the way around. Beginners start as white belts and then work through a grading system with colored belts that become increasingly far until they earn a black belt. The belts do have tabs which are awarded as the practitioner works through the syllabus but the tabs are usually signified with colored tape or embroidery.

This differs to systems like Brazilian Jiu Jitsu, where there are fewer colors of belt to work through, for adults at least, but all belts have a black rank bar on them that signifies how advanced the student is within that grade. In addition, unlike Taekwondo, the junior grading system for Brazilian Jiu Jitsu has half-belts, so in between white and grey belt there is a belt that is grey with a white stripe running lengthways through the middle.

Difference Between a Taekwondo Belt and Other Belts

Taekwondo belts are essentially the same as karate or judo belts in appearance and material. In general, buying belts made for judo is a good idea because they are the most durable and they are most particularly expensive. Karate belts on the other hand can vary in quality, and some of them do not tolerate being washed well. This is not an issue for a stand-up art, because the belt is worn over a gi and almost never comes into contact with a person’s skin, however some Taekwondo schools include a little grappling in their curriculum and if this is the case then students should definitely make a point of washing their gis to ensure that the risk of transferring infections from one person to another or from mat to skin, is kept to a minimum.

At most Taekwondo schools, students’ progress through the early ranks very quickly but the upper belts are something they may hold for a long Tim. You will therefore want to invest in a very high quality belt as a senior graded student. Many people also have Korean embroidery done on their belts, especially when they achieve a black belt, because they know that they are committed to the sport by the time they get there.