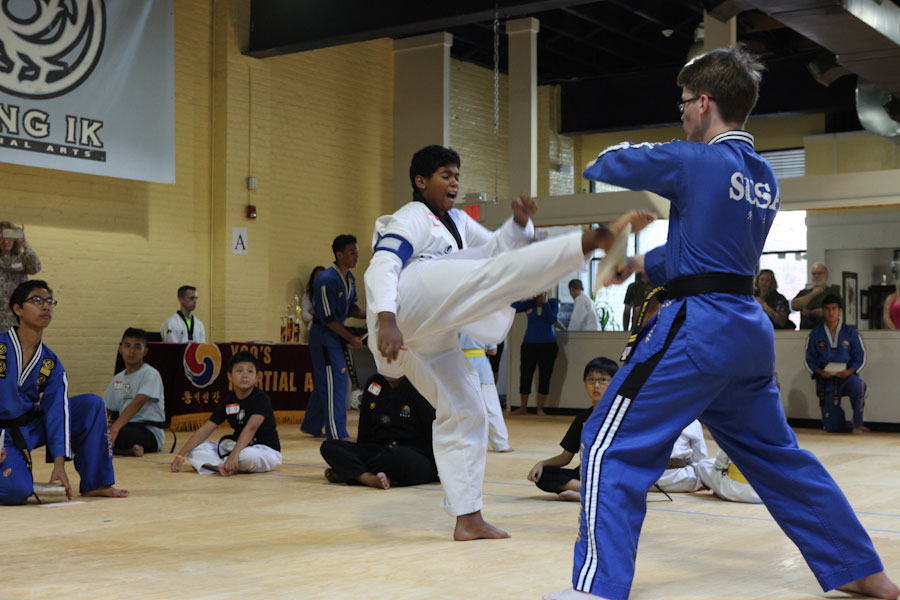 What is Taekwondo Spirit

The original spirit of taekwondo comes from the most basic instincts to survive and was developed as a way to defend oneself by the way of the kick and punch (Tae -to kick, Kwon – blow with hand, and Do – way of life, school of thought).

Taekwondo was developed into a systemized martial art in the age of the three kingdoms. The constant struggle for supremacy and the threat of invasion by either China or Japan, meant the populace was constantly defending themselves and soon developed a fine art of the practice.

Taekwondo was soon consolidated into the Korean martial art based on the hand and foot as a mean for personal defense. Nevertheless the ultimate goal of Taekwondo is the development of true character through adherence to mental, physical and spiritual discipline.

The true spirit of Taekwondo has a base in two essential aspects of taekwondo philosophy: the practical and ideological values of the sport. The practical values comes from the execution of each movement and technique and the underlying principles behind the technique.

Three major ideals make up the ideological side of taekwondo philosophy. These are the technical, philosophical and artistic ideals. Modern taekwondo is best exemplified in its competitions and the pursuit of physical education.

The two terms “Spirit” and “Mind” can be very confusing due to how similar they are in nature. When speaking of the “Spirit” of taekwondo, one often refers to the specific processes of practitioner thinking that is used in regard to the values absorbed through taekwondo study.

When a high level of ability has been reached a taekwondo practitioner is able to execute actions with determination and efficiency. At this p?nt it could be said that the taekwondo spirit has been personified or established to some degree.

It is important to begin with technique but by the same measure technique is also the end result as well. All the values to be gleaned from the practice are found in the study and adherence to technique. These values are present in every aspect of technique building and are created because of it. The spirit of taekwondo begins with technique, developed by practice of technique and is also perfected through technique.

Technique is the starting point, as well as the final goal of practicing taekwondo. All internal values of taekwondo emerge from its technique; they exist on any stage of technique development and due to it. Taekwondo spirit starts from technique, develops within it and reaches perfection through technique.