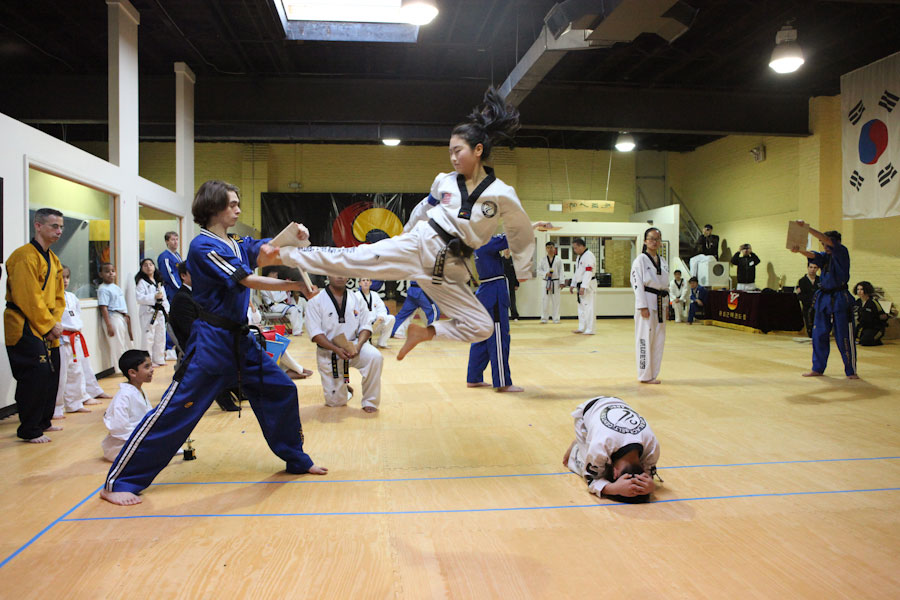 Taekwondo is an ancient martial art that has plenty of rules that might appear to be quite overwhelming to white belt beginners. The following is our quick guide for taekwondo’s basic rules for Kup graders who are just getting started.

– The main aim of taekwondo is landing as many blows and kicks on your opponent as possible within the target areas that are allowed.

– A taekwondo contest is made up of three rounds that are each two minutes long – with one-minute breaks in between each of the rounds.

– A taekwondo victory can be achieve by default when an opponent is disqualified, through scoring the most point or by knockout.

– In a taekwondo contest two points are awarded for kicks on the face and one point for every legitimate strike to the body. An additional point is awarded for a knockdown.

– The contest is overseen by three judges and one referee, and a point is only awarded when a hit is registered at the same time by two or more of the judges.

– Kicks to the body and head are awarded points only if they are landed with the part of the foot that is below the ankle.

– Body blows must be made with with the front knuckles of the middle and index fingers in a tightly clenched fist in order to be awarded points. Punches to the head are not allowed.

– Taekwondo penalties are awarded for such offences as turning your back on your opponent, pushing, feigning injury, holding and grabbing.

– Gam-jeom is the most serious offence in taekwondo, and results in the deduction of one point. Gam-jeom includes things like attacks to the fact with anything other than the feet, pulling your opponent to the ground, stepping over the boundary line deliberately, and throwing an opponent.

– When an opponent gets knocked to the ground, a 10 second count is started by the referee. A knockdown occurs any time part of the body of a contestant other than the foot touches the floor. A mandatory eight-second count is taken before the referee determines whether a contest should continue or not.

– A knockdown is turned into a knockdown when a competitor is unable to regain her or his feet by a ten second count or if the referee determines she or he is unfit to continue at the eight count mark.

– If the competitors are level on points when a contest ends, then the contestant who has the most points prior to penalties being deducted is declared the winner. If after that the scores are level still, then the contest is awarded by the judge to the fighter that he thinks was most willing to make attacks. The one exception to the rules occurs during a competition final, when a tied contest goes into a ‘sudden death’ round. The first contest to score a point is the winner. If during this round there is no result then the referee once again makes the final decision.

– A taekwondo Olympic competition is an elimination tournament format for deciding the silver and goal medals.

– Once this initial tournament is completed, two groups get drawn from all of the competitors – with the exception of the semi-finalist – who lost to one of the finalists. Two pool winners are then produced by the knockout process. Then each pool winner faces the defeated semi-finalist from the draw’s other side and the winners from those two bouts then compete to win the bronze medal.