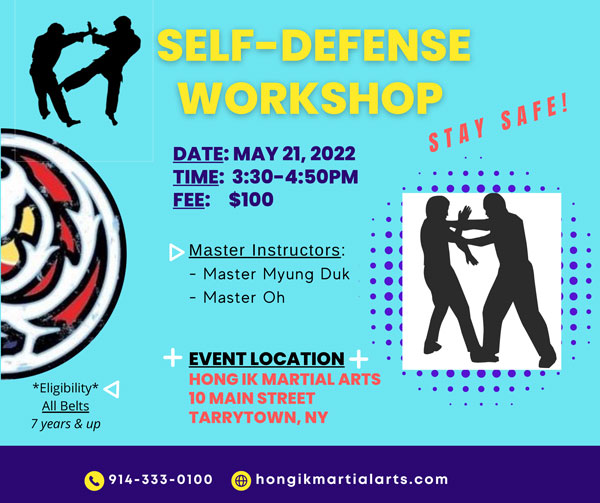 On May 21, 2022, Hong Ik Martial Arts hosted the first Self-Defense Workshop (Level 1) at the Tarrytown location. We had 35 candidates attend this special training, along with Jidojanim Yoo, Hyunsanim Master Vanover, Hyunsanim Master Oh, and Hyunsanim Master Shin Min, along with guest Master Sara. They were supported also by SUSA/MUSAs Isabella and Emily, who just a few hours earlier received their first degree blackbelts!

Stretching was led by the SUSA, and warmups were led by Ji Do Ja Nim, which included rising kick, front snap kicking, and horseback stance with punching. For some students, it was their first time visiting the Tarrytown Headquarters, and some were visibly nervous, at first. The Masters and Susa attended to the students to make sure that they banished their fears, so that they could focus fully on training. Once the stretching and warmups were complete, the students were ready for the next part of the workshop.

Master Vanover first spoke with the candidates about the importance of awareness and confidence, and how these can be our first, and sometimes best lines of defense. With regard to the physical world, we should always be mindful of our surroundings. Our posture can communicate our state of awareness, so it is important for us to always walk tall and keep our eyes alert. Someone who exhibits low confidence signals their weakness, and could become a target for an attacker. We should also be very careful not to be distracted by devices, such as mobile phones, when we are walking or outdoors. Lack of awareness can lead to a victim being taken by surprise.

Similar to the physical world, there are dangers also in the virtual world. It is important to learn to identify potential dangers or scams and avoid them entirely. Especially for children this is true. Perpetrators will often pretend to be like their potential victims, lying about their age or interests to gain their trust. We teach the candidates that they should never share their personal information such as their age or where they live or go to school, so that they can avoid this dangerous situation, and that they should never, under any circumstances, agree to meet in person with someone they encountered online. It was also advised that children should report any type of suspicious activity to their parents or teachers, and adults to the proper authorities.

It was suggested that the only fight you can truly win is the one you do not get into. The meaning of this is that the first ideal is to avoid or escape before a situation has the chance to become dangerous or violent. Masters Vanover and Oh demonstrated Level 2 and Level 3 types of defenses, which the candidates will learn in due course. For today’s training, we began with the basics.

The most common type of attack or restraint is someone grabbing a defendant’s hand or wrist. Our students partnered up for this first practice and took turns with right and left hands, and then switched attacker. The first defense is taught in our curriculum as White Belt #1, and this is because again, it is a very common attack, and also simple (when you’re trained and focused) to escape. It involves 5 simple steps: first you make a fist so that your wrist enlarges and has a better chance of releasing; second, the defender turns the fist toward the gap in the attackers fingers; next, they grip their own hand on top with their opposite hand; then the defender steps back with the opposite foot (to the open space between the two people), and lastly, they turn their whole body and pull their hand free. In shorthand, it goes something like: fist, turn, grab, step, pull. When you add a loud kihop sound, it demonstrates confidence to your attacker, and has the potential to scare them away!

The second technique is a variation on the first; the attacker grabs the wrist on the same side as their body (not reaching across the body). In this version, the defending person will instead open their palm extending their fingers, turn the palm toward themself and rest the ridge or edge of the hand (on the pinky side) on the wrist of the attacker. Then they add their other hand on top and step toward the attacker pushing down with both hands with the support of their whole body weight. It is important to maintain eye contact with your attacker for a few reasons: first it gives you information on the location and state of your attacker’s awareness; second it displays confidence. Once the defender is free, the next course of action should be to run, far and fast!

Now that the student partner pairs had become familiar with each other, they practiced target kicking; each holding the kicking pad for the other. This sequence was two front snap kicks with alternating legs, moving forward; then they would take two steps back to reset. The pairs practiced a few rounds of this. Next they returned their targets and practiced two-step sparring with each other. The first line performed two kicks, and the opposing line should avoid, and then they switched attacker and repeated. Again, the idea is that you are always fully focused on what you and your opponent are doing. Any break in concentration could cause injury, so focus was essential. The candidates also performed a few rounds of this training.

Our last high intensity training was a favorite among many, running flying side kick. The students moved to the far end of the training area and took turns running toward and performing flying sidekick into the pads. As they practiced, the students improved, jumping higher, improving accuracy, and displaying more confidence with their louder kihops.

Ji Do Ja Nim then asked everyone to line up again in their original positions. At this point, their heart rates were elevated and they had built up a lot of heat and energy. To cultivate and conserve this energy, and to bring our heart rates to rest, we practiced Sushik. Standing with feet shoulder-width apart, we raised our arms with the inhale, and floated our palms down on the exhale. After a few repetitions, we closed our eyes; this has the effect of allowing us to internalize our focus and see what is going on inside our bodies, as well as feeling the warmth, magnetism, and for some, a tingling sensation. We return the good energy we have built into our lower dahn jun, for use at a later date; and with our good posture and concentration, can connect our energy to the universe, raising our awareness to an even higher level.