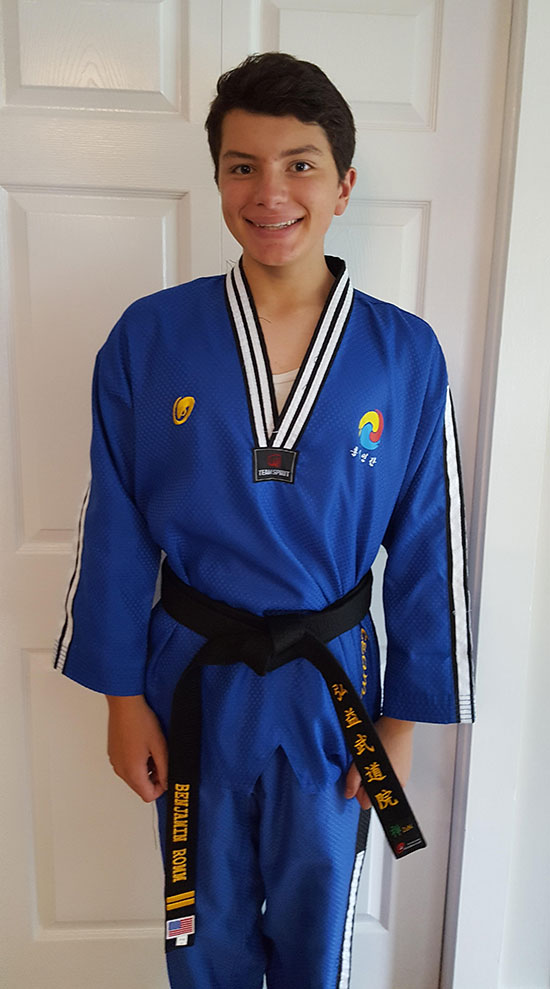 This is too hard! I don’t want to keep running. I know I must complete the test, but I don’t enjoy it. No, don’t think that way! I am not pushing through something that I don’t want to, I am running up and down hills because I do want to. That was the lesson hammered into me at my Taekwondo black belt test by Grand Master Yoo. When you are doing something difficult, you cannot have a negative mindset. To succeed, you must have a positive mindset because you want the challenge.

My name is Beni Romm, I am 15, and I live in White Plains, New York. When I started Tae Kwon Do in second grade, I had no expectation of becoming a blackbelt, let alone learning lessons about perseverance and perspective. I started Taekwondo simply because I had friends doing it and it sounded fun. In other words, I was drawn to the “Tae” and “Kwon” elements of TKD, which translate as “kicking” and “punching,” respectively. While I was initially drawn to the physical element of TKD, the mental and physical element, “Do,” or the “good way of life,” is why I have returned, three times per week, to TKD for over seven years.

The first lessons I learned were about discipline, practice, and how to work for reward. The Dojang, the Korean term for the gym where classes are held, has strict rules of decorum; even in second grade I was required to maintain good posture: hands and feet in place, silent, attentive, not moving unless instructed. This concept of respect for the Dojang is broadly applicable, both as respect for oneself and one’s belongings, as well as respecting others, the Golden Rule. Much of TKD involves the development of muscle memory in order to learn long combinations of movements and kicks, known as the form or the “Poomse.” The discipline to practice is necessary in order to achieve the reward, in my case, the next belt.

I later learned, however, that TKD yields much greater rewards than belt ranks. In seventh grade, I started training for my black belt test. The black belt test was qualitatively different from previous belt tests, as it was designed to be much more physically demanding, and, therefore, much more mentally demanding. The test included a running section, which totalled about five miles of running, broken into various lengths and required speeds. This part of the test was very physically challenging to me, and I therefore had to persevere, using mental fortitude. The same was true of the requirement to hold plank for three minutes towards the end of the second part of the test. After completing the black belt test, I had new confidence in my abilities, and I realized that any challenge can be defeated with the right mindset and the ability to persevere.

High school presents a new set of challenges, as I have to incorporate TKD into a busy schedule of long school days, homework, and other extracurricular activities, such as debate team and robotics club. On days when I go to TKD after school, I do not get home until 8:30 or later, which necessitates disciplined study skills.

Now that I am older, I benefit much more from the mental, spiritual, and philosophical elements of TKD. Meditation has taught me how to focus on important things in a distraction filled world. The study of Korean history has given meaning to what seemed previously as simple kicks. I now understand that integral to TKD is the idea of “service for the benefit of humanity.” All of these years I have not been learning kicks and forms, but life principles and a code of chivalry to improve myself, and, through myself, the my community and the world. Through the lessons that I have learned in TKD, I am confident that I will achieve many more great things, both in the Dojang and in the outside world.