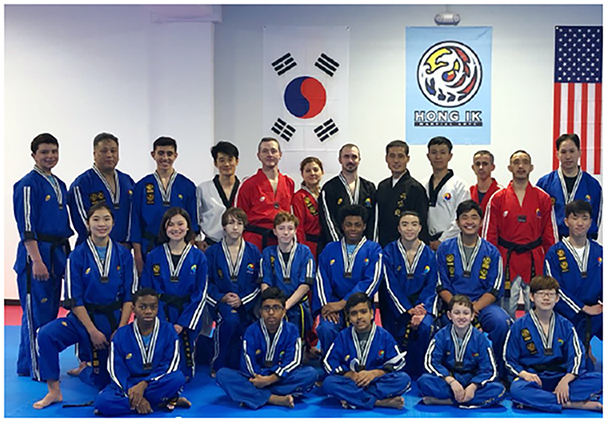 This month’s HST was held on September 22nd in Tarrytown. Following a group warmup led by SuSa Davis, Grand Master Yoo led the class with a series of 3 sequences from the Aghoopigi forward stance position and L- stance position. The first being lower block step forward punch. Second was front snap kick into double punch. Third was single knife hand into single punch to the body. After doing this training individually, The Masters and SuSas made groups of 3, the objective being the person in the middle absorbing opposite energies from different sides. Following this, the groups of 3 elevated their previous month’s SuSa and Hyunsa personal training curriculum. The July HST introduced a new pattern utilizing basic kicks of rising, front snap, round house and side kick. This had all been done in the air. But this month’s HST, the group did those same sequences with focus target pads and shields. The outside 2 students held the targets while the student in the middle went through the kicking pattern created by Ji Do Ja Nim. This training concluded with the outside 2 students holding for any style roundhouse kick, forcing the person who was going to react quickly to a new situation. The theme of the physical part of class was to learn to react quickly but while remaining composed. Being active but also centered. Learning to flourish in spontaneity and remain calm in chaos can have great benefits in dealing with adversity in day to day life