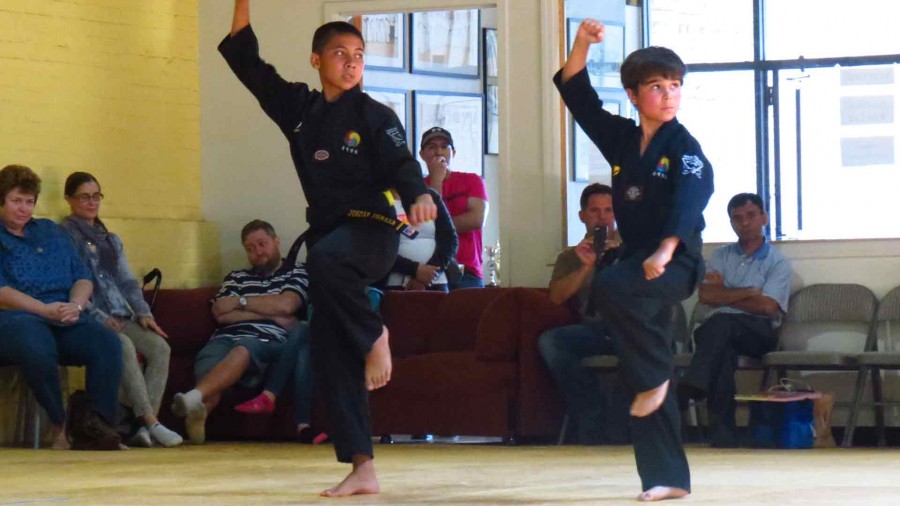 Technique 1: Mastering The Taekwondo Side Kick

1. Assume the correct position for a side kick, which is known as Yop Chagi.

This means adjusting your position so that the target you are trying to kick is located to the side of where you are. This is the only suitable position to have your target in for a side kick. Make sure that your body is properly positioned before proceeding with the kick.

2. Make Sure Your Standing Foot Is Firmly Planted

Imagine drawing a line between you and your opponent. The foot that you are standing on should be perpendicular to this line. Having solid footing is essential for this kick to work. The Yop Chagi in Taekwondo kicking requires a perfectly balanced body. The major’s people who have been studying Taekwondo for years have mastered the art of rotating their foot into the proper position as they execute the kick. This makes it fast and easy to complete the kick.

3. Begin by raising the knee of the foot that is kicking, bending your knee as you lift your foot.

By doing so, the extension of your leg will be faster and will also cover a greater distance, putting a lot of power behind your kick.

4. Move your foot directly at your target, powerfully delivering the Taekwondo kick.

Try to open up your hips as you simultaneously extend your leg to maximize the power behind your kick.

5. Your objective should be to make contact with your target using the outside edge of your foot and your heel.

As with a front kick in Takwondo, you should do your best to avoid hitting your target with your toes to minimize the risk of injury.

1. Assume the correct stance to execute the Huyeo, or hooking kick.

The starting position is identical to a side kick. Again, your target needs to be positioned to the side of your body. Ideally your target should be fixed for this particular kick despite the fact that the movement of the kick itself is more spherical than with a side kick.

2. Lift your knee toward your chest just as you did with the side kick.

This allows you to get more power behind your kick so you can deliver it with as much force as possible. Again, this is exactly the same motion as you did with the side kick.

3. As you move your leg forward, extend it outward.

Balance is the key to successfully completing your kick without toppling over. Unlike the side kick, your foot should not move directly toward the target. Instead, it should move forward toward your toes. This forward motion is required so that you can complete the hooking motion by pulling your foot backward in the next step.

4. Move your foot backwards to complete the hooking movement.

At this point, look carefully at your target to determine whether it has moved since you began the kick and make any necessary adjustments.

5. Use the heel or bottom of the foot to make contact with your target.

Avoid using your toes or the top of your foot to kick since this leaves you prone to injury. Instead, focus on hitting your target with your heel or the bottom of your foot.