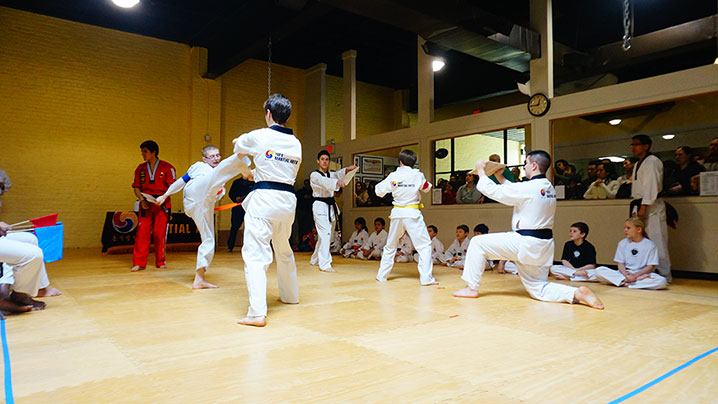 Tae Kwon Do In Martial Arts

As many people already know, there are many benefits to martial arts training. However, with all of the different styles that are available, you may be wondering which style is best for you.

The following information is to help you learn a little more about the different martial arts including Tae Kwon Do. This information will provide you with the insight you need to make an informed decision about the style that may be best for you.

Tae Kwon Do Martial Arts was created by the Korean after by General Choi Hong Hi after World War II. Although Japanese leaders had banned the use of Korean martial arts by Japanese soldiers, Koreans were still knowledgeable about the sport. After Korea was granted limited freedom after the war, the martial arts experts decided to create a new type of Korean sport that they would be proud of.

As a result, Tae Kwon Do is a mixture of Subkak (old Korean martial art), Taekyun (old kickboxing sport). Although there have been many attempts made to unite Tae Kwon Do practitioners, there are two different styles. These styles are ITF and WTF.

This was created in the 1880s in Japan by Jiguro Kano. During this time, Jiu Jitsu had a less than stellar reputation, and was known for the style of martial arts preferred by brawlers. However, Kano understood that martial arts had the possibility to be a positive influence in people’s lives, especially younger children. This is the reason why he decided to eliminate the more dangerous aspects of Jiu Jitsu and created Judo.

It was the first martial arts sport to incorporate the familiar white uniform and color belts that are synonymous with different grades.

The sport as most people recognize it was created in the 1970s. It was created by some American practitioners who had grown tired of traditional martial arts training, and decided to train in a boxing gym. They brought their kick fighting knowledge to the gym.

Kickboxing is divided into several divisions including:

Point and light contact focuses on using a variety of protective equipment and fought in a small area with rounds lasting up to 2 minutes.

So, how do you know which style of martial arts is best for you? It will depend on whether you are interested in the sport for historical facts, to learn self-defense or looking to build other positive character traits.