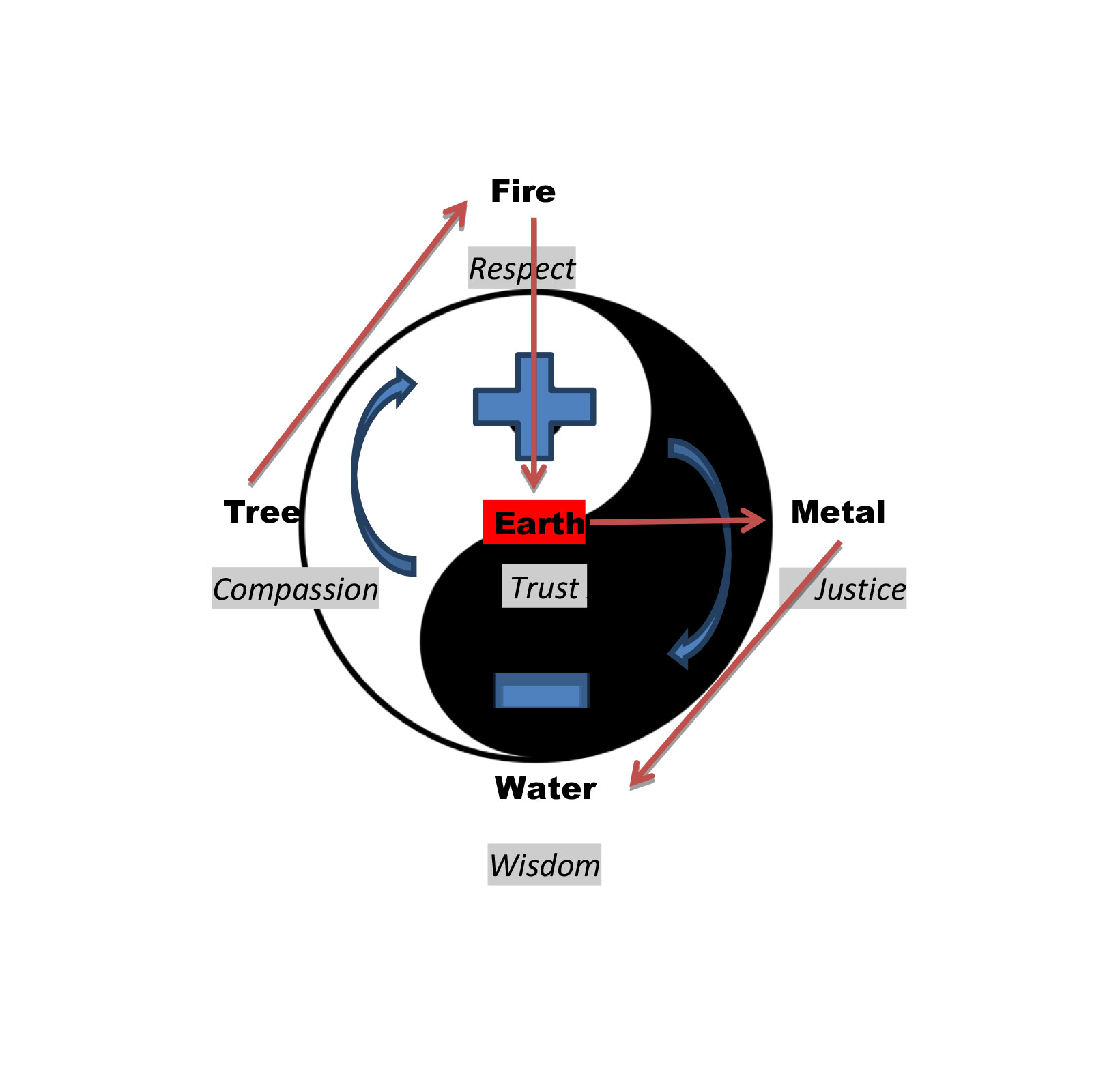 As previously discussed, the principle of Tae Geuk indicates that even if there is a beginning there is no beginning (Il Shi Mu Shi), even if there is an end, there is no end (Il Chong Mu Jong). Energy levels of Um and Yang can be described on a scale from 0 to 10. However, there is no 0 (no energy) and there is no 10 (completion of energy). Yang energy starts to gather at energy level 1 through stimulation, and then releases energy outwards at the peak of energy level 9; Um energy peaks at the energy level 1 and then starts to convert into Yang energy. In the harmonious condition of Tae Geuk, the cycle of Um and Yang is a continuous flow, with one channeling into the other.

The solar planets are constituted by 5 elements (OH HAENG): tree, fire, soil, metal and water, with each having an Um and Yang energy component. They contribute ten total different energies (5 elements x 2 different forces = 10) into the solar cycle and the earth cycle. When combining the principle of OH HAENG we can arrive at 10 years of solar cycle and 12 years of earth cycle (refer to previous study). This results in a total of 60 years of solar and earth energy cycle (refer to previous study). During the first 60 years of the cycle we develop physical strength and grow our energy and wisdom. During the second 60 years of the cycle we use the physical strength, matured energy, and wisdom built from the first 60 years of the cycle to contribute the society, nation, and world we belong to.

For Martial Arts, we can look at Tae Geuk as it relates to the physical body, the energy body, and the spiritual body.

Tae Geuk and the Physical Body.

Muscles have both an Um and Yang component. The shaded side of muscles represents Um and the sunny side represents Yang. For example, in the arms biceps are Um, while triceps are Yang. Similarly, the outside of the legs (exposed to the sun) are Yang, while the shaded inner thighs are Um. This is easy to grasp when comparing the strength of these muscles. When pulling someone towards you with your arms, the pulling action of biceps is weaker than the pushing force of pushing someone away from you using your triceps. Observe the difference in pushing someone using the triceps (they can be moved very far, even knocking away someone larger) as opposed to pulling someone towards you using the biceps, were the impact on the other person is significantly less (they move only a little, or maybe lose balance, but the effect is minimal). The same can be said for the pushing force of your quads vs the pulling force of your hamstrings, with quads being far more dominant both in power and speed. It is very apparent when observing a front snap kick, with the extension using the quads (Yang) being stronger and faster than the pulling in (Um) of the hamstrings after the kick.

Another example can be found in observing the single knife hand block. Arms crossing (pulling inwards) manifests Um, while arms extending outwards (expanding energy) for the block manifest Yang. Similarly, when entering into a back stance (L-stance), the initial motion of toes pulling in (using muscles on the inside of the leg) represents Um, while the motion of stepping outwards with the heal (using muscles on the outside of the leg) represents Yang.

As humans we experience various mindsets which we can associate with nature’s four seasons on Earth. For instance, compassion (“In”) is a characteristic of spring. During spring, tree flowers provide a flower scent for all humans to cherish, without expressing judgement. Such indiscriminate giving is an example of Yang energy. Another mindset humans express is respect (“Yeah”). This can be associated with summer. During the summer season, the leaves of the trees are most active and full of energy. Such Yang state is vital to respect, which needs to be highly active, like fire, in order to be expressed effectively, without laziness or hesitation. Another key mindset is justice (“Uyy”) and can be associated with the fall season. We can observe that in order to withstand winter, trees change their shape, discarding leaves so as to preserve energy. This is done with dispassionate judgement and is an example of energy from Um side of force. Finally, there is the mindset of wisdom (“Jee”). We can observe wisdom in nature during the winter season and the element of water. During winter, water is aware of the freezing that takes place above ground, even without going up. It therefore accumulates (Um state) underground but with full awareness of what is occurring in the world above.

By understanding and applying theTae Geuk energy body principle one is able to know right time to use balanced and harmonious mindset whenever needed. This will vary depending on the situation at hand. Humans must learn to use trust (“Shin”) to determine which of the four mindsets is appropriate in any given situation.

Tae Geuk and the Spiritual Body

The human brain has a dark (Um) and bright (Yang) side. The Um side leans towards repetition, repeating/re-living past cycles over and over like watching a movie countless times, over and over. The bright side of the brain is focused on a bright future, pulling out high quality information that is stored inside the brain. To better understand how this works you can think of the brain as the ocean with stored water (information), wind (thoughts), and waves (spirit). The information (stored water) is activated through thoughts (wind), producing different qualities of spirit (waves). The waves come in different shapes and sizes (high, low, crashing, gentle, etc.) by wind acting on stored water. This indicates that the brightness of the spirit is determined by thoughts framed by stored information.