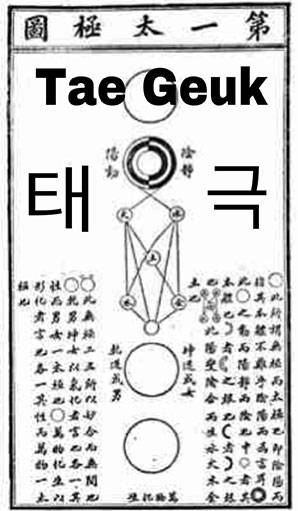 In examining Tae Geuk, we first need to understand what it is. The Um/Yang symbol on the Korean flag shows two colors: red which represents Yang or strong/positive energy, and blue which represents Um or soft/negative energy. This symbol is called Tae Geuk. The Tae Geuk symbol shows them in a balanced harmony, flowing one into the other when each one reaches its energy peak. The principle of Tae Geuk indicates even if there is a beginning there is no beginning, even if there is an end, there is no end.

When looking at the creation of the universe (the Big Bang), that was the accumulation of all energy in the universe, until it built to its maximum level, and exploded outward, creating the universe we occupy. But before that point of explosion, the universe needed to contract, draw in all energy to accumulate it in order to explode it outward. From this examination we can understand there is preliminary state before Big Bang which is a lower energy level state than Big Bang. Where then does the preliminary energy state before Big Bang come from? Before the Big Bang or after the Big Bang? It is difficult to say which one (Big Bang or preliminary state) is the beginning of all universe. It sounds no different than the dilemma of which came first: the chicken or the egg?

At this point if we apply Tae Geuk principle we can understand the creation of the universe more clearly. 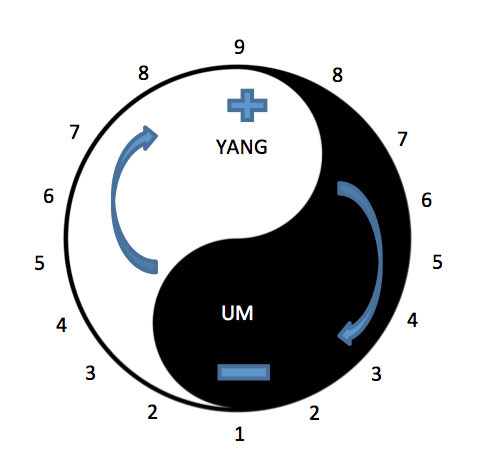 Another way to look at this relationship is to look at the four seasons. Summer is the most active (Yang of the Yang), reaching its energy peak at the summer solstice, while winter is the least active (Um of the Um), reaching its energy peak at the winter solstice. As summer energy level reaches its peak and turns into fall, the plants (and animals) start to conserve. They chip away at what is not required to survive in the low energy time; for example, trees start losing their leaves. Once winter hits its lowest point and begins to stimulate energy again, moving through spring, a time of rapid growth and expansion. It is important to further understand that during winter, all action does not stop. Underground, the action of accumulation is going on and soon it starts to grow Yang energy by stimulating energy has been built since summer solstice.

The life we received is so noble and precious. The light and clear energy from the heavenly sky (solar energy) becomes important elements for our spiritual body. The heavy and dark energy from the earth becomes important elements for our physical body. There are 5 universal elements which constitute the solar system: tree, fire, soil, metal and water. We call these 5 elements “OH HAENG”. Tree and fire are considered Yang side elements, metal and water are considered Um side elements and soil is considered a neutral element.

Each element has two different forces. One is intense and the other is mild, but both opposing forces are based on the same element. By deriving two different forces from each element, ten total different energies emerge (5 elements x 2 different forces = 10). These 10 different energies contribute into the heavenly sky (=solar energy) and earth. However, on the earth there are 4 seasons, in contrast with other solar planets. The transitional periods between each season are considered neutral. This is why the neutral soil element is divided into 4 different forces (one in-between each season), as follows: tree soil, fire soil, metal soil and water soil, all based on the same (soil) element. Thus, for the earth cycle, 5 elements contribute 12 different force energies (4 elements x 2 different forces = 8 + 4 transitional soil force energies). This principle of OH HAENG applies as 10 years of solar cycle and 12 hours (as one day traditional time cycle in eastern Asia), 12 month, and 12 years of earth cycle.

How many years of life are given to humans?

Ex. in the year 1914, the solar energy is 1 and earth energy is 1’, during that year human receives combined energy of

Since the birth of humanity, we have been passing through each year with various experiences. The life lessons of each year are unique, and we grow from these experiences. Once we pass 60 years of life, we finally return to the same energy state as when we were born, and we then repeat one more cycle.

In the womb, the energy of the baby is mostly Um, with everything being provided by the mother. After birth, the baby is constantly looking, exploring, and growing, moving towards a high Yang state (0-15 years). This then moves to the highest Yang state (16-30), and after peaking at ~30, energy begins to wane towards a more Um state (31-45). The first cycle finally ends at Um again (46-60).

If we look into our life cycle carefully we can understand its principle: the first 60-year cycle in which you put sincere efforts to build good health, energy level, and wisdom, and the second 60-year cycle in which you devote everything you have built for the benefit of humanity (one by one without rush). Depending on how we build the first 60-year life cycle, the happiness and joy of life will be determined.