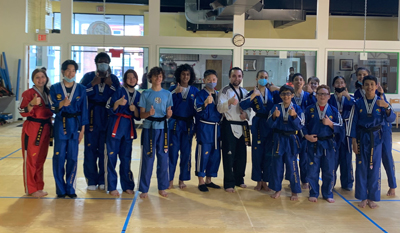 On Sunday, May 15, 2022, Susa gathered at the Tarrytown HongIk Martial Arts location for our monthly HyunSa and Susa Training. We began warmups with dahnjun tapping.  Standing with feet shoulder width apart, we used the outside edge of the fists to lightly strike below the belly button area. While doing this, the best way to achieve stimulation is to lightly bounce at the knees; it was helpful to move along with the rhythm of the music that was playing, but even without music, you can make your own rhythm.

For the first few minutes we did it this way with fists closed, and for the last two or three minutes, with open palms, meaning your flat palm makes contact with your lower abdomen.  We could feel our bodies warming up and joints loosening.  After, we paused for a moment to notice the tingling and warmth sensations that flowed through our bodies. We followed this with our regular group stretching.

Ji Do Ja Nim briefly reviewed the leading indicators of energy: light, sound, and waves (or vibrations).  He reminded us that just like the earth, we are composed of iron (blood), water, oxygen; and that we also have a magnetic field or aura around us that protects us from negative energy; as the magnetic field of the earth protects against the harmful radiation emitted from the sun.  We are a microcosm and should seek the best type of energy, which is universal.

Next we did some self-training with the focus target, engaging our core muscles.  The first pattern was right knee, left knee, right leg front snap kick, left leg front snap kick.  Then we did these patterns continuously in sets of three, five, and ten.

For the next training, we used the length of the dojang to do laps of freestyle kicking.  In this type of training, it is important to not establish too much of a pattern, and to imagine that your sparring partner is moving around, so that your movements are spontaneous but also strategic. With footwork, you can cause your partner to change positions or tactics, and gain advantage.

Again using the full length space of the mats, we used balance and footwork, along with excellent posture and timing, to practice moving forward with back stance (L-stance) knife hand, turning to forward stance straight punch.   It is important not to rush through this type of training, but rather to make sure your body is properly aligned and that your weight shifts according to your moving foot to keep balance.  High concentration further stimulates energy and helps you achieve clarity.

Next, we practiced the Susa Recruit’s basic Qigong. It is a set of stances and blocks that follows a pattern of changing direction.  This day we only did the first combination, forward stance-lower block-inner block; there is a second combination that will add another four directions, for a total of eight.  The first step is a 45 degree turn, then as we move through the pattern we next turn 90 degrees, then 180 degrees, and then 90 and 180 again, so we end up facing each of four corner directions.

The last high intensity exercise consisted of sets of kicking combinations with the dummies. The pattern of skipping roundhouse, slide back, counter roundhouse, slide back and spinning roundhouse. After each set you are naturally starting on the opposite leg. In this training, concentration is paramount.  After you successfully memorize the pattern, the challenge is to do the pattern continuously and to do this, you must concentrate fully.

The last exercise was jigam training. Facing forward, we assumed a ready or joonbi stance, and with open palms facing each other in front of our abdomens comfortably, we were to notice the sensation on our palms, and if there was any magnetism or energy felt between them. Then we slowly moved our palms closer together and apart in smooth motions. Jigam training is an excellent way to help us to level our emotions and bring us from an overly excited or hyperactive state, to a calm mind.   This practice also helps us to settle and save the energy that we have built up during practice.