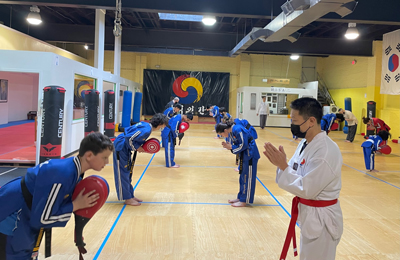 On Sunday, March 20, 2022, Susa gathered at the Tarrytown HongIk Martial Arts location for our monthly HyunSa and SusaTraining. The HongIk Spirit Award for the month of March is Jung Choong training, and this day’s activities were rooted in that principle. It is the principle of a strong physical body.

After self-stretching, warm ups were conducted by Chun Shim HyunSaNim. Jidojanim Yoo followed with an excerpt of the ChunBuShin Gong, which is a series of postures that each relate to a symbol and concept of the ChunBuKyung, which describes the creation and manifestation of universal energy. Additional Jung Choong energy training to stimulate our physical energy were sets of squats, pushups in a 9-7-5 pattern, and 21 situps, the minimum requirement for a Susa. Sets of rising kicks rounded out the warm up.

In preparation for our next exercise, Jidojanim reviewed some of the basic principles of energy that we have been studying in the philosophical portion of our training. We are familiar with the concepts of Eum and Yang (soft and hard, dark and light, gathering and expanding, etc) and Jidojanim explained that the outside features of our bodies are like Yang, or like the sunnyside, and the interior features are like Eum, or the shadow side.

So while we practiced the Susa Recruit’s basic kigong, we were to make sure that we were observant that when pulling our feet in toward our bodies, we lightly dragged our toes along the floor, and while we stepped out and away from our bodies, that we pushed out gently our heels. These opposing physical attributes provide us with balance, and help to keep us centered, even as we move. You may note the contracting muscles are on the in or shadow side of our bodies as we pull our legs or arms in, and the expanding muscles are on the out or sun side, as we move our limbs away from our bodies.

This kigong is a set of stances and blocks that follows a pattern of changing direction. The first step is a 45 degree turn, then as we move through the pattern we next turn 90 degrees, then 180 degrees, and then 90 and 180 again, so we end up facing each of four directions. This day we only did the first combination, forward stance-lower block-inner block; there is a second combination that will add another four directions, for a total of eight.

Next, we did another partner exercise which consisted of 7 sets of kicking combinations. The first Susa faced the kicking dummy and did a double roundhouse kick; they then turned around to kick pads held by the partner Susa in a pattern of roundhouse-roundhouse-spinning roundhouse. After the first set, the other person took a turn, then we switched feet, and each completed another set of 7 with practice starting on the other leg. In this training, concentration is key. If you are able to focus on each motion, you create a force through concentration that allows you to

persevere, and you find that you have more endurance. This is because all of your energy is being applied to the task at hand, instead of diffused or dispersed by distraction.

The last exercise was intended to circulate and solidify the great energy we’d build by training. We utilized a simple kigong posture of forward stance, with the forward hand slightly extended open palm in front of the solar plexus, and the other, also open palm, facing slightly downward in front of the lower danjun. After a few moments, we shifted 180 degrees to repeat on the other side. In this training we focus on our palms to see if we can feel heat, tingling or waves; on our good posture, and on our smooth breath. Then closing practice: facing forward, we assumed a ready or joonbi stance, and circulated some of this energy with smooth, graceful movements of our arms and open palms. There was no need to force or push with our muscles, but rather to open our minds and allow the energy itself to guide us. In this way, we ended the class with a kind of moving meditation.