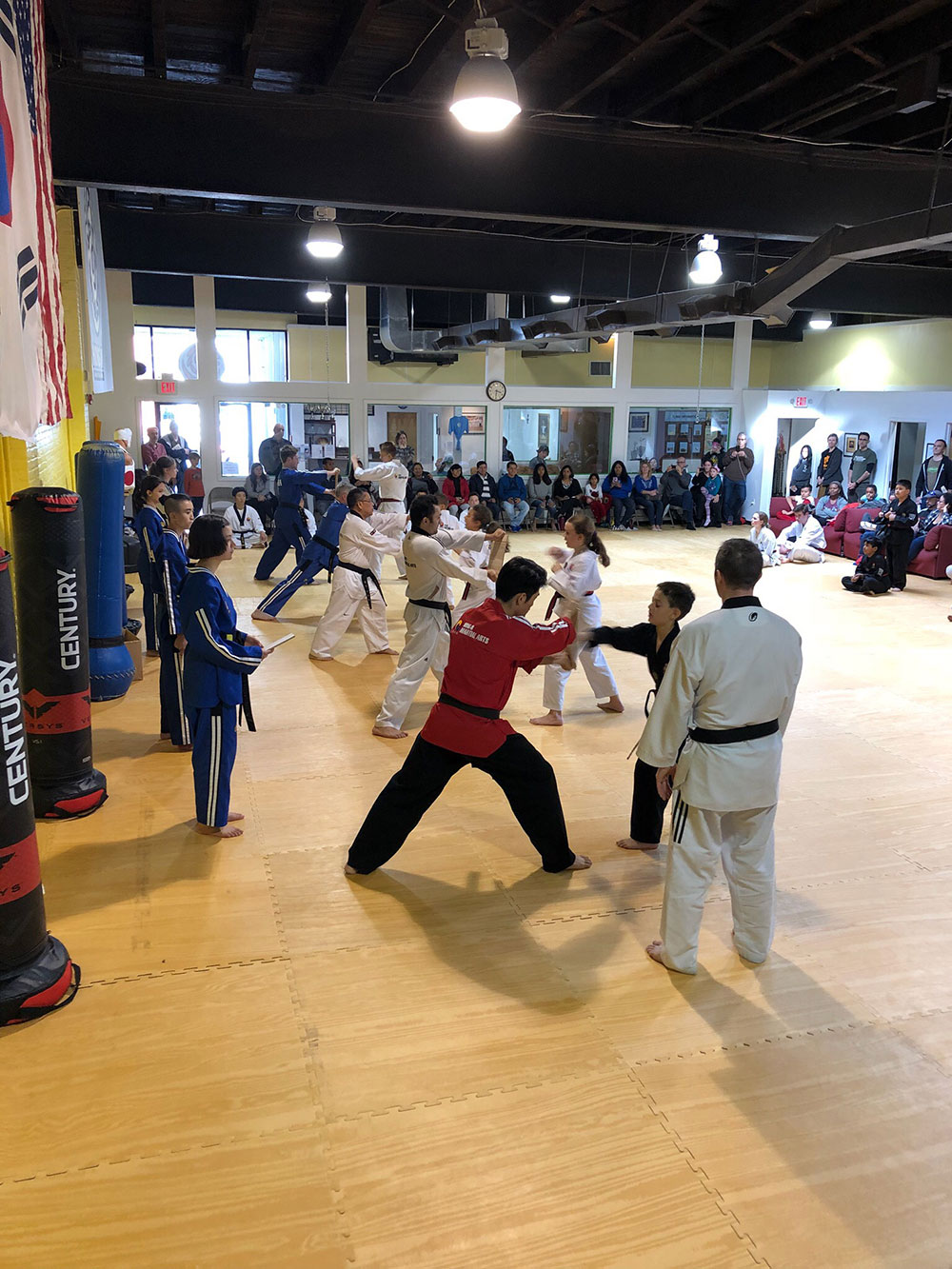 On October 13, 2018, Hong Ik Martial Arts students took their indoor test for their 1st, 2nd, and 3rd black belts. They were tested on their forms, kicking combinations, self defenses, one step sparring techniques, rolling, board breaking, holding pushup position, and sparring. It was 2 hours of hard work, skill display, and team spirit. Family and friends were invited to support and cheer on all candidates.
The test began with an encouraging speech from Grandmaster Yoo reminding the importance of having a long term perspective on how the students should apply their effort and not just focusing on the end result. He spoke about how before one passes away, different experiences and memories would flash through their mind. And if they are sincere in applying their all into every movement and skill tested, this “black belt” experience would leave a lasting impression on their heart that even many years later into old age they will remember. Futhermore, it would aid in leaving this earth with happiness. He also reminded us that the test for black belt is not in 1 or 2 days, rather it is the accumulation of all the years of training. The point being that the individual himself/herself is the best judge because only he/she truly knows how much work they have put into preparation for achieving their prospective black belt rank. The feeling of accomplishment would be reflective of their earnestness from the start of their training.
Strong posture, energy, and concentration were main checkpoints for the judges’ grading. Those testing for 2nd degree black belt needed to show balance and good body control in transitioning back and forth 6 times on a focus target doing spinning round house kick and in the same format jumping back kick against the big shield. Those testing for 3rd degree needed to demonstrate their acrobatic abilities in various rolling falling techniques. In addition to that, they had to show the 6 required heavy bag drills with hand strikes, kicks, and footwork. It was a great display of power, speed, and fluidity.
Putting time into acquiring skill is important, but so is persevering through physical and mental difficulty. The students needed this indomitable spirit especially in the later parts of the test. Endurance was paramount in getting through sparring rounds against 1 opponent and then later 2 opponents simultaneously. Immediately after that, they had to hold a minimum of 3, 4, or 5 minutes of holding pushup, depending on their rank. Last was board breaking doing punches and kicks.
This Fall October Black Belt Test was a memorable one. It was great to see, once again, students attempting to reach for various black belt ranks. One reason being that the diverse curriculum of Hong Ik Martial Arts is presented. Another that the senior and junior ranks both motivate each other to elevate higher. We look forward to our continued growth and evolution in future years.