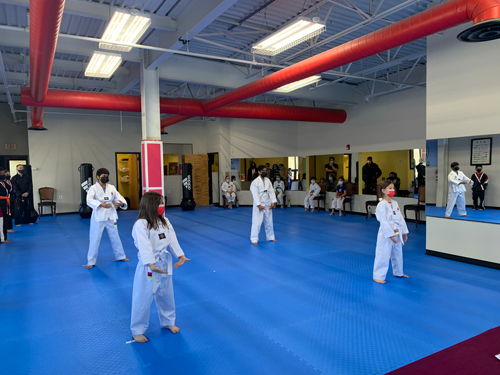 On February 5, 2022, Hong Ik Martial Arts of Brewster held their 1st Promotion Test.  HIMA Founder Grand Master Yoo began the test speaking about his beginnings of teaching Taekwondo in the US and how the respect of the people he felt during his time touring as a KTigers Demonstration Team member inspired him to move to this country right after completing his military duty in Korea.  In addition, he spoke of the evolution of Hong Ik Martial Arts and its mission to spread widely the benefits of building characteristics like patience and compassion through Martial Arts Training.  Various belt levels were present, as some students had transferred from other schools.  All promotion candidates displayed great energy in their forms, kicking combinations, and speaking about what they had learned in the reading material pertaining to their respective belt principle.  The pursuit towards good physical health as a foundation for growing emotional maturity and awakening our innate bright consciousness were an essential part of what was talked about at the latter part of the event.  Also discussed was perseverance through obstacles by having a big vision involving the improvement and collaboration of others.  The test concluded with Tarrytown SUSA/MUSA members and Master Lee Demonstration.  They performed the Chun Bu Shib Yi Gong, dummy kicking drills, and board breaking.  The day was a great success and Hong Ik Martial Arts of Brewster will look forward to many more in the future.